In the early 1980s, the heat generated in the absorption and drying circuits at the Kemira sulphuric acid plant in Helsingborg, Sweden was lost into the sea next to the plant.

Following a total reconstruction of the cooling system to include plate heat exchangers in a closed loop cooling circuit, the temperature of the cooling water has been raised to a level at which it can be used for district heating.

From direct cooling to heat recovery

In early 1980s, Kemira changed its acid cooling system from direct cooling to heat recovery. In the direct cooling system, the heat from the absorption and drying towers was emitted to the sea. With the heat recovery system, the heat is instead transferred to a closed loop cooling water circuit containing demineralized water. This water is heated and the hot water is used to heat district heating water for the city of Helsingborg.

By 1999, the lifetime of the anodically protected shell-and-tube heat exchangers had come to an end and they needed to be replaced. At the same time, Kemira decided to totally rework their acid cooling system. Instead of using three acid tanks (one for each absorption tower and one for the drying system), they installed one acid tank, supplying both the drying system and the two absorption towers with circulating acid.

All the old coolers were replaced with three semi-welded Alfa Laval plate heat exchangers in D205 with FKMS gaskets, connected in parallel. The D205 plate material and the FKMS gaskets were selected due to the high acid temperature of 105°C. 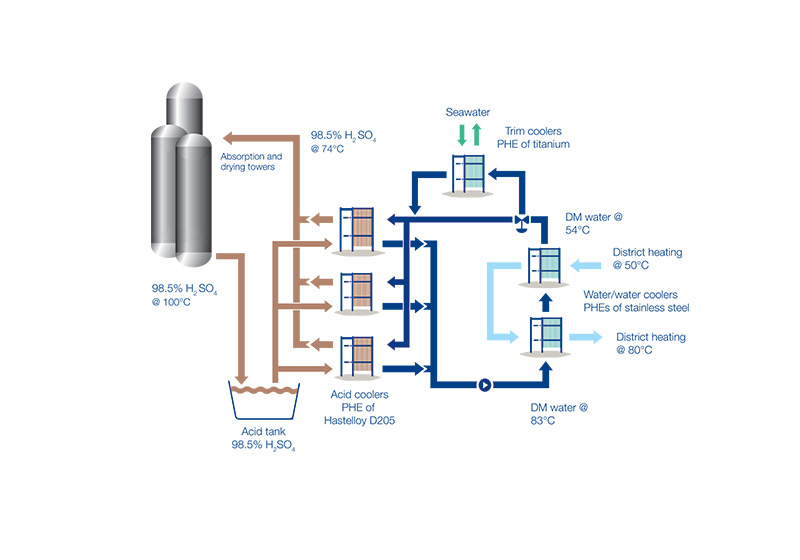 In the Kemira sulphur burning acid plant, with a capacity of 1,000 tons per day, around 530 MWh is recovered from the drying and absorption towers per day. This heat is delivered to the district heating network of the city of Helsingborg. Kemira delivers a total of 240 GWh per year to the network.

This is equivalent to around 22,000m3 of oil, corresponding to approximately 25% of the city’s requirements. Of this total, 80 GWh is supplied as steam and the remainder is heat recovered from the drying and absorption towers. This means that during the winter months heat is provided to about 10% of the city’s inhabitants but in summer time Kemira supplies all heat needed for domestic water.

The total cost for the heat recovery system introduced in the early 1980s was 45 MSEK (including a 3.5 km long pipe to the district heating center). The payback time for the system was less than a year, since at the time Kemira supplied heat to the city worth 80 MSEK annually (due to higher acid capacity). The switch to a common acid tank for all three towers and new acid coolers in 1999 cost 10.5 MSEK. Calculated in today’s oil prices, the value of the heat supplied to the city is approximately 22 MSEK annually. As a result, the payback time was again less than one year.

For the city of Helsingborg, this arrangement means less dependence on oil and thus reduced emissions of sulphur dioxide into the air. Furthermore, the project eliminated the need for a new 45 MW co-generation unit, which would have cost the city 150 MSEK in the 1980s.

For Kemira, the delivery of heat has become an important complementary product to sulphuric acid and other chemicals. It has also nearly eliminated the need for cooling water.

The demineralized water circuit heats the district heating water from 50 to 80°C in two of Alfa Laval’s large plate heat exchangers having a temperature approach of only 4°C. The temperature in the district heating circuit can be raised to 90-95°C by injecting waste steam from the sulphuric acid plant. Two of Alfa Laval’s medium-size plate heat exchangers are used as trim coolers in the demineralized water loop whenever needed to meet seasonal variations in demand for heating. The trim coolers are by-passed when they are not needed. 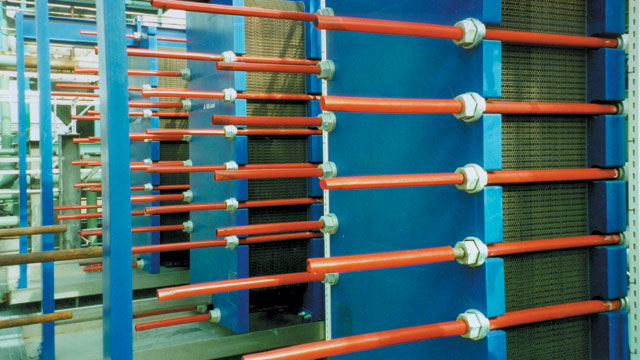 About 65 MW of heat is generated in sulphur burning acid plants with a daily capacity of 1,000 tons. Around two thirds of the heat originates from the sulphur burner and the converter. Most acid producers know how to recover this heat for production of high-pressure steam. However, the remaining one third of generated heat is usually emitted into the sea or the air in direct cooling systems. The plate heat exchanger makes it possible to economically recover the heat from the circulating acid in the drying and absorption towers. By installing a closed loop of cooling water, the heat can be used for other purposes such as district heating, boiler feed water preheating, process heating in adjacent plants, space heating of factories and offices and production of fresh water by desalination. 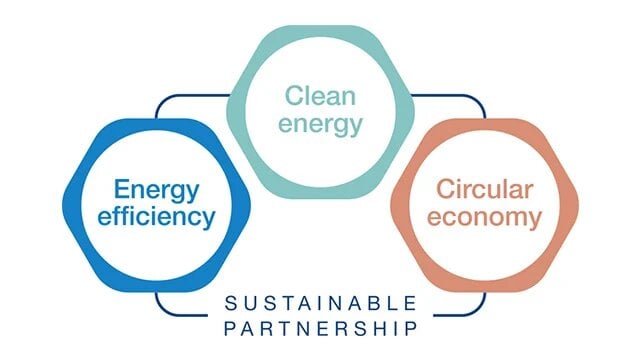